Dom Perignon: The man, the myth, the bubbles!

Dom Pierre Pérignon, a French Benedictine Monk born in 1638, is a wine making legend. However, not for the reasons you may think.

As legend and popular myth has many believe Dom Pérignon is credited with making sparkling wine bubbly. But, although he made considerable contributions to the field of wine making and Champagne, he did not discover the bubbles that make sparkling wine what it is today.

In fact, the bubbles that make sparkling wine sparkly were a huge problem for wine makers at the time.

The process that produces these bubbles is called secondary fermentation. It happens when the inactive yeasts within a bottled bottle of wine reawaken and begin to generate carbon dioxide. This process produces a lot of pressure and can cause the cork to be pushed out or the bottle to explode.

Needless to say, Pérignon spent a lot of his time as a wine maker trying to prevent this from happening. Today, this process is done under controlled conditions, and produces the Champagne we know and love.

Pérignon became the cellar master at the Abbey of Saint-Pierre d’Hautvillers in 1668. With Pérignon at the helm the abbey became very successful and doubled the size of its vineyards.

During his time as cellar master Pérignon revolutionized many wine making techniques. Many if not all of these techniques are still used today. These include pruning and harvesting practices, as well as blending techniques using different grape varieties to make the finished wine more complex in flavour.

In the vineyard Pérignon picked only the best available grapes. He also used grapes from different vineyards, and insisted on keeping each pressing separate during fermentation. Pérignon was also the first to produce lighter coloured wines from red grapes.

Pérignon died in 1715 and was buried in the abbey cemetery. There is a statue commemorating his influence located by the world famous winery Moët & Chandon in the winemaking region of Champagne. In addition, Dom Pérignon is now a renowned brand of Champagne produced by Moët & Chandon.

What’s the story behind why Dom Perignon 1959 is so special?

Only 306 bottles of Dom Perignon Rose from the 1959 vintage were produced. They were never sold, because they were consumed at the Persian anniversary celebration in Persepolis.  The 1971 vintage was exclusively ordered by the Shah of Iran, Cyrus the Great in the celebration of 2,500 year of Persian Empire. .  A lot of Dom Perignon Rose Enotheque was auctioned for US$170,641 in 2010. 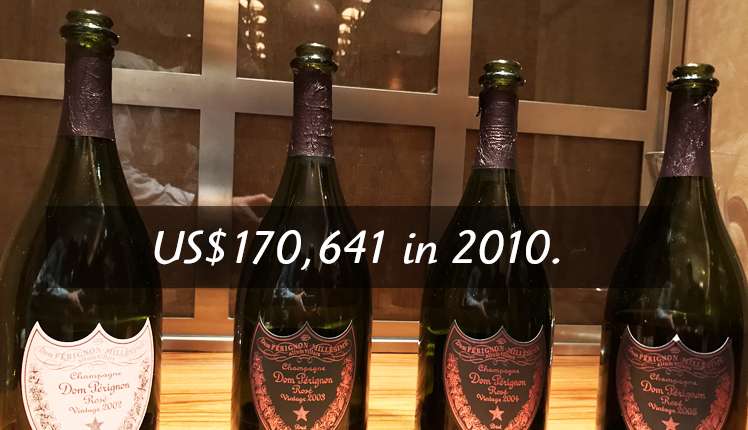 Rose Gold version of Dom Perignon is a 1996 vintage. A bottle of this champagne was auctioned for 35,000 British Pounds in April of 2010. The 6-liter bottle was sold at Westbury Hotel at a party after the screening of a movie.  Rose version of Dom Perignon is a special blend of this champagne.  This blend uses only the grapes from Pinot Noir.   In 2008, two bottles from the same lot were auctioned for around US$84,700 in New York.

And make sure to check out Rosehill Wine Cellars for all of your wine storage and wine drinking needs! So, the next time you raise a glass of Champagne in celebration remember the man responsible (not for the sparkle), but for just about everything else that makes it taste so very good. Cheers!